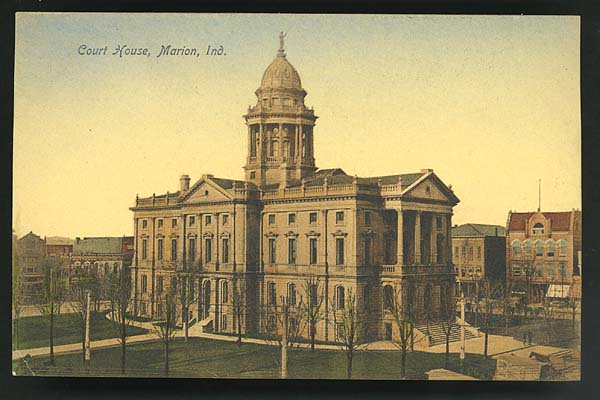 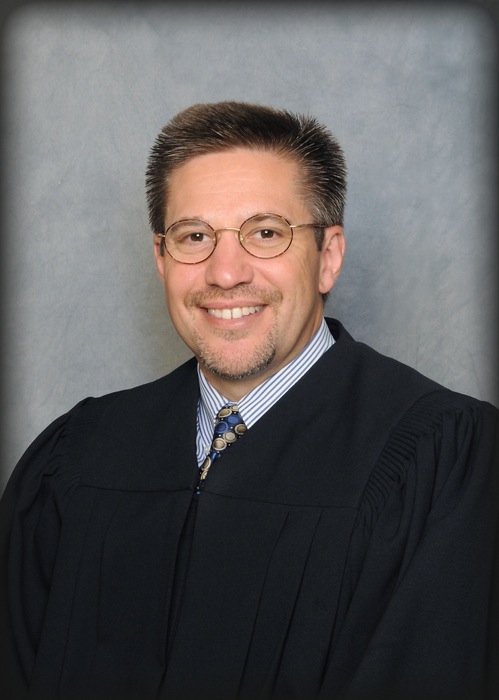 HISTORY OF THE GRANT COUNTY COURTHOUSE

Whitson's History of Grant County reports that the Circuit Court was first held at the home of David Branson (one of the co-founders of the City of Marion) in 1832. The first case tried in the Court was a civil matter, John Rawlins v. Samuel McClure, Sr. The first criminal case was The State v. Jonathan Berry and Jessie W. Thompson, who were both charged with assault and battery. Later, the Court moved to the home of Riley Marshall, where it remained until a Courthouse was constructed. Marshall's home was located where Boots Creek empties into the Mississinewa River. Lack of space in the Marshall home resulted in court sessions being held under a large elm tree in his front yard when the weather permitted. The early judges in Grant County were circuit riders. They would travel from court to court covering large areas and serving several counties. Judges coming to Marion many times walked as much as 10 miles, since that was as close as the railroad came to the city.


At a meeting of the board of county commissioners held in 1880, it was decided that a new Courthouse was to be erected on the public square for a more convenient place in which to transaction and house the county's business. Later that year, an architect was employed at a salary of $6,700 to make plans and specifications the construction work on the Courthouse (to correspond to a courthouse in Elyria, Ohio). Also in 1880, the county awarded the contract for construction to a bid of $133,875.01. June 1, 1881 was set as the date for the formal laying of the cornerstone. The town was beautifully decorated with red, white, and blue for the event. Following a town parade, a crowd of 10,000 people gathered to witness the formality of laying the cornerstone. Inside the cornerstone was a blue tin box which contained: the names of all the county officers; the names of charter members of the Masons and the Odd Fellows; a history of the county written by William Neal; the first newspaper published in Marion by Joseph Horton in 1842; and copies of the Marion Chronicle, Grant County Republican, Marion Democrat, and Fairmont News.


After construction, the Courthouse measured 154 feet long, 86 feet wide, and 136 feet tall. The top of the Courthouse was adorned with a dome extending 40 feet above the roof, and surmounting the dome was the Statue of Justice. In 1960, the dome was removed and the statue was placed in Matter Park (the statue, however, was later sold to Weber's Junk Yard for scrap).