Earthquakes can happen at any time of the year and occur without warning, although they usually last less than one minute.  Aftershocks following the initial earthquake may occur for hours, days, or even months.  All 50 states and 5 U.S. territories are at some risk for earthquakes.

The risk is higher in identified seismic zones including:
In California and the western U.S. States, earthquake faults can be hundreds of miles long and be visible on the surface of the earth. In the central U.S. however, faults are buried deep underground and are generally categorized as “seismic zones”, or areas where many smaller faults are clustered together to produce seismic activity. While some zones, such as the New Madrid Seismic Zone, may be more widely known, others such as the East Tennessee and Central Virginia Seismic Zones can also produce damaging earthquakes at any time. 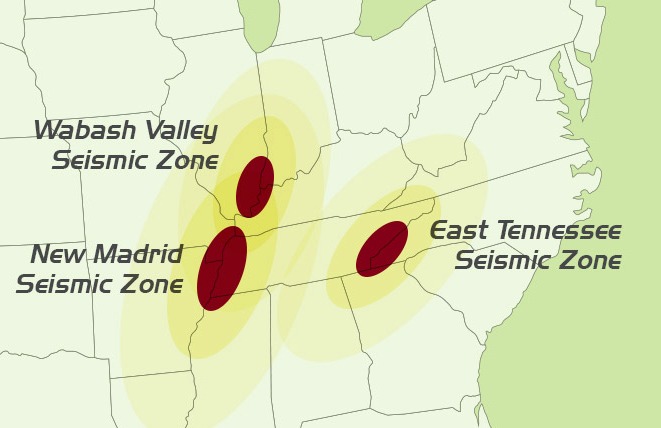 Most recent Indiana Earthquakes:
BEFORE AN EARTHQUAKE
Movement of the ground seldom is the actual cause of death or injury. Most casualties result from partial building collapses, falling objects and debris, like toppling chimneys, falling bricks, ceiling plaster, and light fixtures. Many of these conditions can be prevented by taking a few steps now to prepare.

IN CASE OF AN EARTHQUAKE